‘If I'd been anywhere else on the planet, other than Vietnam, I'd be dead’: British pilot

A coronavirus-sickened British man who at one point was on the verge of death during his treatment in Vietnam says he is thankful for the medical care he has received in an exclusive interview given to Tuoi Tre (Youth) newspaper as his hospital discharge is now a matter of time.

The interview was done this week in an ICU room with help from Dr. Tran Thanh Linh, deputy head of the intensive care unit at Cho Ray Hospital in Ho Chi Minh City, where the Briton is treated.

Dr. Linh translated Tuoi Tre questions for the patient during his daily check-up on Wednesday.

The 43-year-old man, a Vietnam Airlines pilot, was identified as Vietnam’s patient No. 91 of COVID-19, the respiratory disease caused by the novel coronavirus, following his diagnosis in mid-March.

He was initially admitted to the Ho Chi Minh City Hospital for Tropical Diseases and transferred to Cho Ray on May 22 after having been cleared of the virus.

On May 8, it was announced that only ten percent of his lungs were functional and that a lung transplant might be his only viable path toward recovery.

However, he has made a remarkable recovery over the past weeks, with doctors now saying he will soon be well enough to be discharged and return to his home in Scotland without the need for a lung transplant. 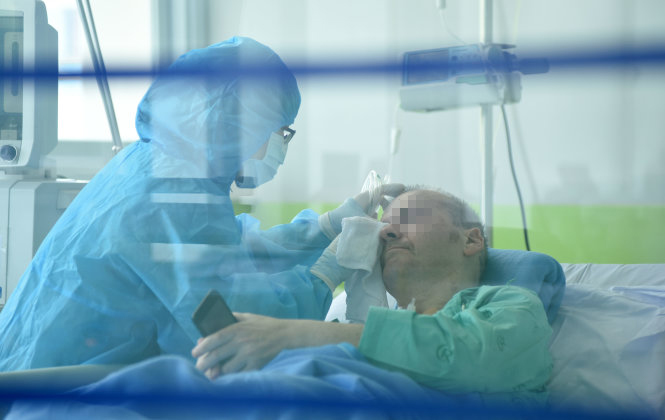 Prior to starting the interview, the doctor talked with the Scotsman about how he was sleeping and whether or not he was hungry.

The patient responded that he was fine, but tired and sore. He also explained that he was not hungry due to having been fed via a tube overnight.

After the doctor assured him that he could have food whenever he was hungry, they started a number of exercises, which the doctor requested he try to do by himself.

Later, Dr. Linh asked him whether or not he remembered the first day he came to the Ho Chi Minh City Hospital for Tropical Diseases, to which the patient responded that he had trouble remembering what happened after flying into Vietnam and taking the next day off.

In the following exchange transcribed from a recording, the pilot made a reference to Saigon, the former name of Ho Chi Minh City, when he detailed his flying record prior to hospitalization on March 18. 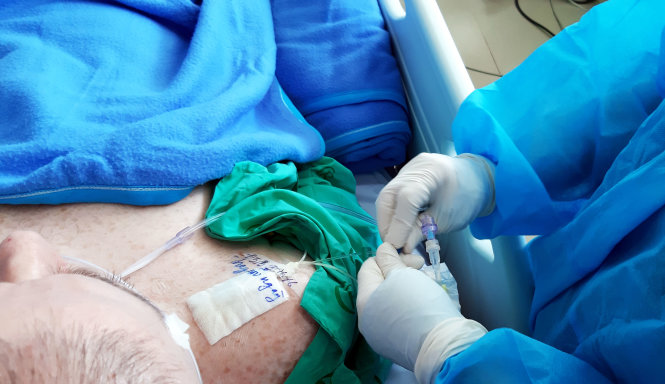 Doctor: How many years have you been a pilot?

Patient: Fifteen. One flight with Vietnam Airlines, and I caught COVID.

Doctor: That's not a long time with Vietnam Airlines.

Patient: I was with them in December.

Doctor: Do you remember how many flights, how many hours of flying with Vietnam Airlines?

Patient: Hanoi and back. I went to Hanoi, and I came back as a passenger.

Patient: No. Ho Chi Minh City to Hanoi. We came back as passengers.

Patient: Ho Chi Minh City to Hanoi as active crew, and we left the aircraft in Hanoi, and we came back to Saigon on a domestic flight. We had to take the aircraft up to Hanoi because it was getting used the following day to go out from Hanoi.

Doctor: I remember you don't have any brothers or sisters?

Doctor: So no family here?

Doctor: Is your family in Scotland?

Patient: No family. All dead.

Patient: My friends are helping.

Doctor: Do you have any friends in Vietnam?

Patient: One. One that I trust. 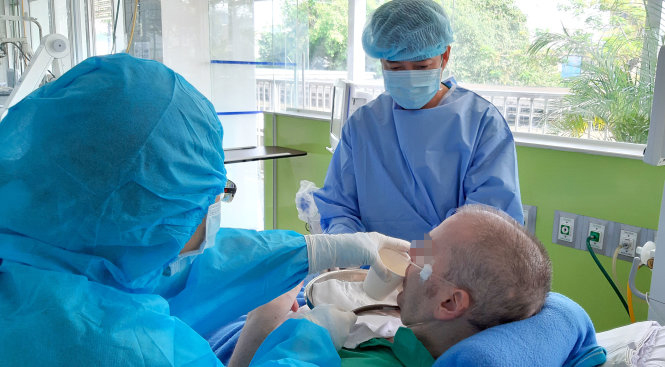 During the conversation that follows, the name ‘Buddha Bar’ comes up.

Situated in Thao Dien Ward in District 2 — a neighborhood populated with high-end villas and a vibrant community of foreigners in Ho Chi Minh City — Buddha Bar & Grill was hyper-popular among foreigners and locals.

On March 14, a Saint Patrick’s Day party was organized at the bar. The party has been highlighted as the source of at least 19 infected cases in Ho Chi Minh City — including Patient No. 91 — becoming the biggest cluster of infections in southern Vietnam to date.

The bar has been shuttered since March 19 and has not reopened despite the city allowing similar services to resume from May. 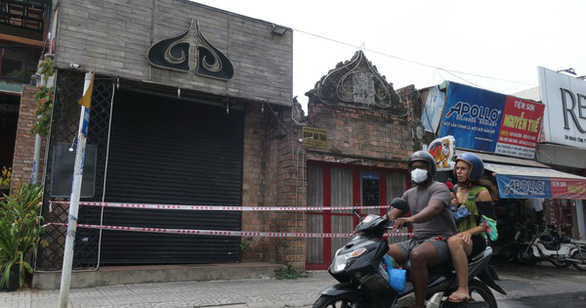 Doctor: Do you remember how long you have been living in District 2?

Patient: I got my own flat at the end of February.

Doctor: Do you remember what time you came into Buddha Bar?

Doctor: How many times?

Doctor: Can you drink much beer?

Patient: No. I don't drink alcohol. Maybe it saved me. 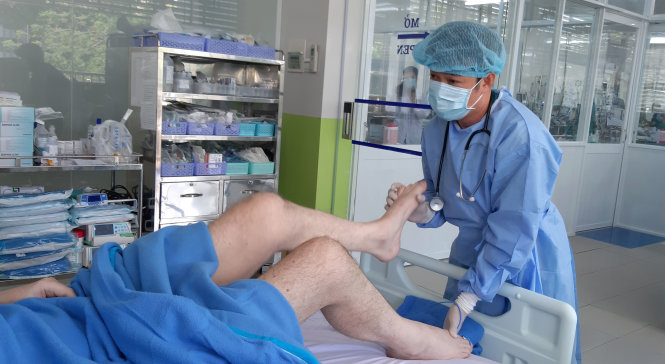 Dr. Linh and the patient then reviewed some articles on the patient's phone regarding what may have been new treatments or other news related to COVID-19.

Doctor: Do you remember how many days you have stayed in the hospitals in Vietnam?

Patient: I was under for ten weeks, and I was with you [Cho Ray Hospital] for four.

Doctor: Do you know you are the most severe COVID-19 patient in Vietnam?

Patient: I've said it before. I've got a friend who's a professor of intensive care medicine, and I've got a friend who's a physio. My ex-girlfriend, she was in physiology therapy. And they all said, "you shouldn't be here." That's a testament to the people of Vietnam and yourself. And proficiency on a first level. If I had been anywhere else on the planet, I'd be dead.

Doctor: You know, we are very, very happy to see that your conditions have gradually improved, and, I think, in a very short time you will be back to your job.

Doctor: What do you want to say to the medical team in Vietnam?

Patient: I will say, thank you so much. You've been phenomenal. And, it's just the amount of time here, I need to go home. I'm blown away by how much everyone smiles. How much everybody's friendly and everything like that.

Then Dr. Linh requested to check the patient's lungs. After shifting the Scot's position again, the doctor explained that his lungs were doing well, so they wanted to try some tests so he could see the progress.

The doctor asked that he take deep breaths, which would help to open his lungs, and reminded him that his right lung was not so good.

During the exercises, the doctor told the patient he believed in him and that he could do better over time.

The patient informed the doctor that he was just warming up, and that he too thought he could do better.

After performing the breathing exercise numerous times with good results, the doctor asked the patient if he would like some water, and the patient said "yes."

After the patient drank the water, the doctor asked if he was hungry, and he said "no" with a laugh.

Dr. Linh moved on to test some of his muscles by having him pretend to fight him.

The doctor was impressed with the results and told the patient that his muscles seemed normal.

Patient: It's hard to forget you. [Laughs]

Doctor: After you recover, do you want to come back working as a pilot?

Patient: Yeah. I want to come back to Vietnam. Yeah, that's the moment.

Doctor: I think you love your job very much.

Patient: Vietnam Airlines has been very good to me so far.

Doctor: Oh, that's good! Then you remember what you promised me? When you fly again, you will take me and my team along.

Doctor: In the sky. On holiday. Yeah! I am waiting for you to do that.

Patient: I'll speak to them. 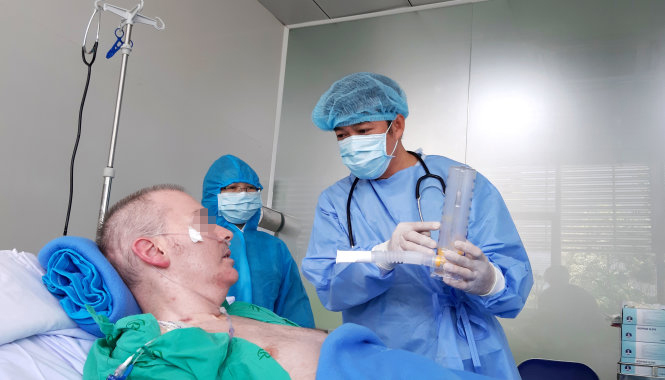 After some more exercises, Dr. Linh talked with the patient about the pandemic.

Doctor: This morning, I read the news. There are lots of people in the world dying of COVID-19. So many countries don't have enough ventilators to take care of their patients. Do you think you're lucky?

Patient: 100 percent. As I said, if I'd been anywhere else on the planet, other than Vietnam, I would probably be dead. But you guys have made it a priority. It's almost like a form of national pride. You weren't gonna let me die, and here I am.

Doctor: In Vietnam, not too many people [are infected] with COVID. That's why we have enough doctors, nurses, medical equipment, and medicine. I think you didn't remember the time when you were in a coma in an ICU room? Now you can because you can read the news. You know, I am very happy about your recovery. You are my patient. I want to take care of you. I promise I will talk to your insurance company and your consular officer regarding your repatriation. I think you want to go back to Scotland now. When I am overseas, I always remember my country, the same as you. Be strong! Eat more food! 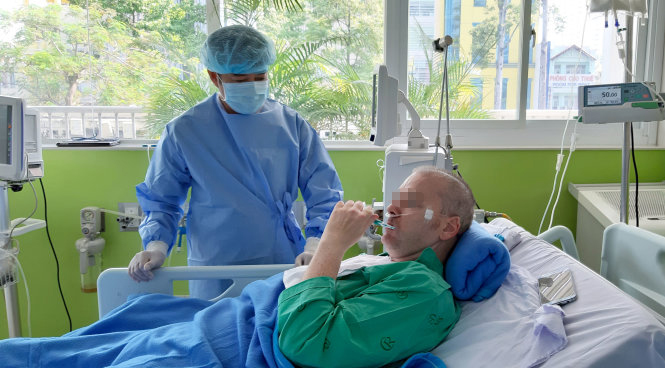 At this point, the patient asked if anything could be done for the gout he was suffering from, and Dr. Linh checked to see if he could move his feet.

He told the patient that after about two weeks he should be able to walk normally. Dr. Linh then reminded him to continue exercising his legs because his hand muscles were normal, but his leg muscles were not.

They proceeded to do several exercises.

Patient: My dad went for Chelsea, but I have always had a soft spot for Bolton.

The two then continued to talk about different aspects of football, including coaches and different clubs before discussing the patient meeting with some important people later in the day.

The doctor commented on his nails, and the patient informed him that he had them cut the day before by one of the nurses.

Dr. Linh informed the pilot that he could now take a rest after finishing the exercises, and also that his lunch would be arriving soon.

The patient expressed hope that it was good and explained that some of the hospital meals in the past had been either chewy, tasteless, or fish, so he had not really enjoyed them. 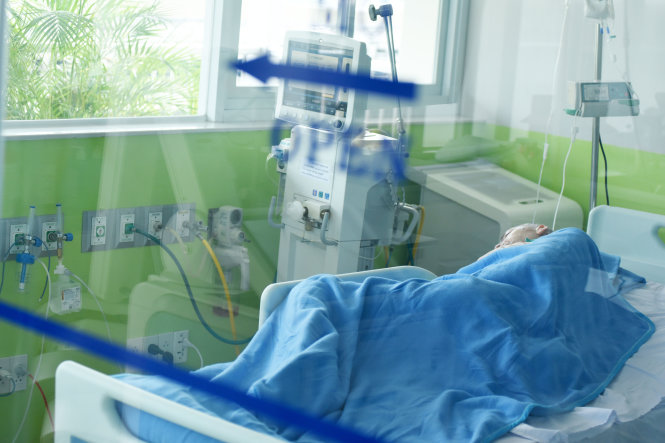