Gulf News shortlisted eight holiday destinations for locals ahead of Eid Al Fitr, the Islamic festival marking the end of Ramadan, the holy month of fasting. This year it falls on June 4-5.

In Hanoi’s Old Quarter, nostalgic visitors can see how it has expanded from its original 36 streets before going to Dong Xuan, the city's largest market, Gulf Newssaid.

The newspaper suggested taking a cruise in Bai Tu Long Bay, the lesser known neighbor of Ha Long Bay, calling it a must-try experience "with days spent kayaking in the pristine waters and evenings spent dining in hidden caves lit up by a thousand candles."

The UNESCO heritage site of Ha Long Bay is a four hour-drive to the east from Hanoi, Vietnam's capital city. 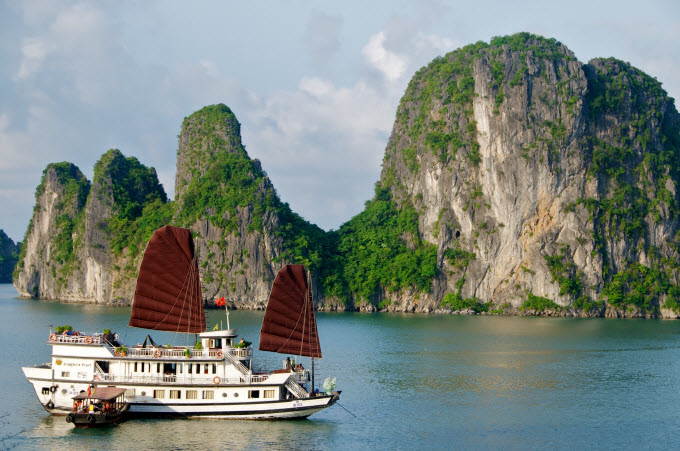 Hoi An, a peaceful town in the central province of Quang Nam, used to be a small rural village but grew into the busiest trading port in Southeast Asia in the 16th century, famous for ceramics and high-grade silk, Gulf News said.

Motorbikes are banned from the town center, so a cyclo ride is an environmentally friendly as well as leisurely way to get around the yellow houses with their old red-tiled roofs, it added.

Gulf News’s other travel options include the Maldives for couples, Portugal for a family holiday, and Russia’s St Petersburg to learn more about history.

Hanoi received a record high of 5.74 million foreign visitors last year, up 16 percent from a year earlier. The city was recently named among the top 15 destinations in the world by TripAdvisor travelers.

The ancient town of Hoi An was recognized as a UNESCO world cultural heritage site in 1998 and has become one of the top holiday destinations in Vietnam, attracting 3.7 million foreigners last year.